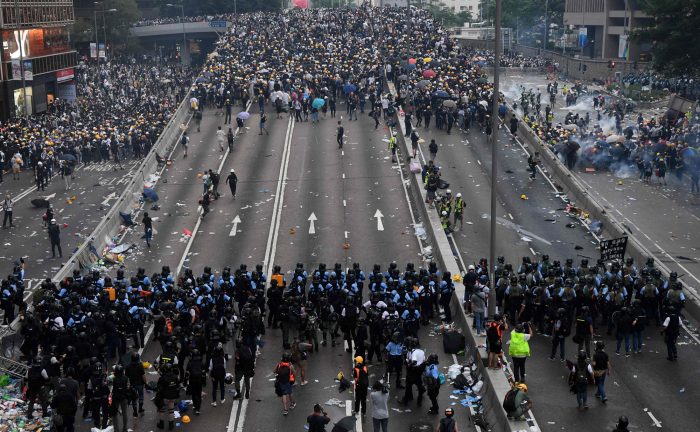 On October 1, 2019, the day of the 70th anniversary of the founding of the P.R.C., Hong Kong’s mass movement was in the lead: Many (foreign) media carried more reports and photos of the violent clashes and the first live ammunition shooting of a protester by the police in Hong Kong than of the CCP’s big military parade with all its fancy weaponry in Beijing. What was meant as a good day for the CCP regime’s propaganda turned out to be more like a PR disaster.[1]

On October 4, the Hong Kong government started a new phase of the conflict. On the base of an emergency law not used since the 1967 riots against British colonial rulers, it banned masks at protests in an attempt to strengthen police powers and to weaken the movement.[2] Angry protests against the mask ban took place in the following days. No slowdown or easing of the confrontations is in sight – and certainly no solution.

After four months and despite violent clashes and destruction, the movement is still supported by large parts of the Hong Kong population. The original trigger – the extradition bill – was finally completely withdrawn in early September,[3] but the movement had long before become more ambitions – in its action forms and demands: It wants to stop the development of a police state, to limit the influence of the CCP regime in Hong Kong, and to gain more democratic control over city government. Still masses turn up on the streets during protests, often in several regions of the city at the same time.

The Hong Kong government has recently banned most demonstrations which meant that anyone still showing up has risked arrest and legal persecution. Peaceful assemblies, permitted or not, have turned into violent clashes quicker than before, even in daylight. Getting to and leaving protest has also gotten harder as the city’s subway company MTR frequently closed stations in protest regions. Property destruction (recently often including fires) has increased, not just against MTR stations but also against businesses whose management criticized the ‘rioters,’ against firms connected to mainland China, like certain banks or travel agencies, against public surveillance equipment, and against government buildings.[4]

Clashes between protesters and pro-Beijing groups in the city still happen, usually with people from both sides being attacked on the side-line of demonstrations.[5][6] Last not least, the violent confrontations between protesters and police have gotten even more intense. While the police continues to use brutal forms of violence in form of tear gas, bean bag and rubber bullets, baton charges, and recently even pointed gun shots, front-line protesters have started to retaliate with more direct attacks on police officers, sometimes with Molotov cocktails, bars, or other weapons.

This spiral of violence is, obviously, a dangerous development – for all sides. The protesters might face even harsher repression if the Hong Kong police gets more emergency powers or the CCP regime intervenes with PAP or PLA units. The Hong Kong government and the CCP regime could destroy the economic role of Hong Kong for Chinese and foreign capital if it further escalates the situation, and that could also be a trigger for more serious social and political tensions in Hong Kong and elsewhere in the region.[7]

With all the attention on the burning barricades, the ‘black bloc,’ and the fight against the police in Hong Kong– the violent confrontation is just one face of the movement. The focus on violence in media reports from Hong Kong even leads to a misconception of the movement as a whole. Its mass base, the determination and intransigence of the protesters, and the ongoing support for violent forms of protest can only be understood when we look at the deeper roots of the movement in the Hong Kong society and its daily practice.

The protest movement in Hong Kong it is still diverse and includes different groups, interests, and forms of action – most of which are, actually, ‘peaceful.’ Among the social groups involved are high-school and university students, workers (including many service workers and white-collar employees, for instance, from the finance sector), teachers and other public employees, pensioners, and more. These groups use a range of action forms, protest demonstrations and rallies, street blockades, singing events in shopping malls, workplace gatherings, shouting the movement’s slogans out of windows at home at a certain time in the evening, and much more. Medical workers stand out as they provide first aid to protesters but have also organized protests in hospitals.

In a recent interview, an anarchist group listed interesting practices of different supporters of the movement:

“In response to teenagers having no homes to return to because they were practically ‘disowned’ by their parents for attending demonstrations and remaining on the streets when states of emergency were declared, people created a network of open apartments to which young partisans could retreat and stay temporarily. In response to minibuses, buses, and subway trains no longer being safe for escaping protesters, carpool networks were formed via Telegram to ‘pick kids up from school.’ We encountered elderly drivers who didn’t even know how to operate Telegram, but who drove repeatedly around the ‘hot spots’ reported by the radio news, watching for running protesters who needed a quick ride out of danger. In response to young people not having any work or enough money to buy food at the front lines, working people prepared supplies of supermarket and restaurant coupons and handed these out to people in gear before large-scale confrontations. […] In response to the suffering, trauma, and sleeplessness induced by long-term exposure to tear gas and police violence, whether experienced first-hand or via graphic live feeds, support networks appeared offering counsel and care. In response to kids not having enough time to do their homework because they are out on the streets all night, Telegram channels appeared offering free tutoring services. In response to students ‘not being able to have an education’ because they were on strike, people organized seminars on all manner of political subjects at schools that were sympathetic to the cause and also in public spaces. Meanwhile, people have started chat rooms on Telegram to discuss subjects that protesters may be curious about; we are in the process of starting one ourselves. The subject matter might be technical (how to take a subway ticket machine apart, how to pass through a turnstile without paying), it might be historical (we recently saw one about the French Revolution), it might be spiritual, or about self-defense and martial arts. All of these efforts are breathtaking in their breadth and efficiency. Affinity groups form to make Molotovs and test them out in forests. Others develop friendships and trust playing war games in the woods, setting up simulations of crossfire with the police. Impromptu martial arts dojos are held in parks and rooftops…”[8]

Other examples of protesters getting together for specific purposes are the ‘Propaganda Group’ made up of designers and others who have created thousands of posters and flyers that circulate in Telegram-groups and get posted around the city. The ‘Press Conference of the People’ formed in August in response to the daily press activity of the Hong Kong police which is linked to the online-forum LIHKG and talks about the events from the protesters’ perspective. Other teams which get formed for specific days of action, like the strike on August 5 or the ‘human chain’ on August 23, or particular purposes like organizing and maintaining the ‘Lennon Walls’ (with information on the movement written on stickers, posters, etc.) in neighborhoods.

Although the movement does not align to a specific political (left or right) current and has no formal leaders or representatives, people from various political groups and organizations are also involved, for instance, people from the ‘pan-democratic’ parties (‘liberals’ or ‘social democrats’ in the wider sense) who go to the front line and monitor police actions while their human rights organizations have been applying for permits for demonstrations but also provide legal aid or pay medical expenses for arrested or injured protesters. ‘Localist’ parties and related organizations (quasi ‘nationalists,’ ranging from people believing in Hong Kong ‘democracy’ and ‘self-determination’ to right-wing and racist groups which mobilize against immigrants from Mainland China and other Asian countries) play a certain role, for instance, also in organizing demonstrations and trying to get permits for them and in providing legal of financial support for arrested protesters. Left-wing activists and smaller left-wing groups (anarchists, socialists, etc.) are taking part in (some of) the protests as well – in the forums, with flyers, sprayed slogans, video screenings, and other interventions – despite the movement’s moderate demands and the lack of a critique of capitalist relations.

All these daily activities of different social actors and political groups are a part of the movement’s collective experience. They are the base for its determination to continue the struggle despite the violent attacks of the police, the high number of arrests, and the refusal of the Hong Kong government and the CCP regime in Beijing behind it to make any substantial political concessions.