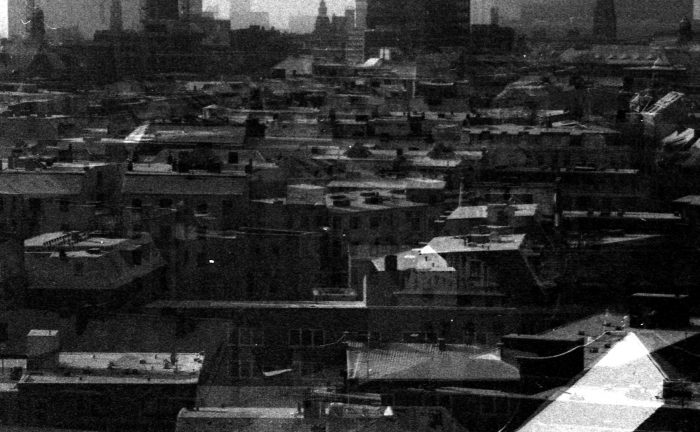 “We, and no one else.” – There is an overwhelming scene in Todd Haynes’ latest film, Dark Waters (2019), which shows how toxic chemicals used in the production of Teflon were spilled into the Ohio River. The lawyer, who went from being on the side of the multinationals to that of farmers and local residents exposed to toxic substances that cause cancer, says:

The system is rigged. They want us to believe that this system will protect us, but it’s a lie: we protect ourselves and no one else. (1)

Such disarray overlaps with a shared feeling: we feel it, we experience it every day, that governments, not to mention multinationals, do not protect us – and, even more, do not seek to protect us. The COP25, the latest of the summits devoted to climate change, resulted in a total lack of measures. A few years ago, the governments assembled would at least have led people to believe in measures, intentions or long-term plans (reduce CO2 emissions by 2173, and all-solar programmed for 2456, just after the colonisation of Neptune). But these pretenses have fallen; there remains only the political truth of our time: there is nothing to expect from governments. This truth conceals another, more surprising one: governments, too, no longer expect anything from us.

The depopulated – To explain this socio-political schism, one could hold to remembering that these governments represent, without notable difference, the financial interests of some without any relation whatsoever to the good of all. In France, for example, pension reform is a windfall for insurance companies; in the USA, Trump’s policy is even clearer: it is his interests and those of his family that matter; in Brazil, the interests of those who want to transform the forest into an extraction and building construction domain – each will complete the list according to their national misfortunes. This analysis must, however, be extended: there is nothing to expect from governments because they are convinced that the global environmental, social and economic situation will inevitably become unsustainable; and this situation leads to its converse: that nothing is expected of us – us citizens, residents, students, workers, the unemployed and disabled, the retired, etc. – to change anything about the future of the climate, of the programmed bio-economic disaster.

It is indeed increasingly difficult not to know that the ecosphere will become uninhabitable for human beings, condemned to disappear with the other extinct species en mass, on infertile lands and at the edge of asphyxiated oceans. Macron knows it, Trump knows it, Putin knows it. They are not in denial, they know, and the take the consequent political: to not reduce CO2 emissions, but to enlarge their bunker, to increase the size of the protections of their private property and the salary of their bodyguards, to adapt their golf course to rising sea levels (which Trump does in Florida). Whether they are neoliberal-authoritarian, national-populist, or colonial-religious, States today have the task not to educate or take care of populations, but to organise the survival of a minimal techno-industrial apparatus for a privileged class. It no longer seeks to maximize its interest in the future, but to optimize its survival in the present.

Once this point is understood, the current political measures take on their full meaning: the end of university as an instrument for training the middle class, renowned for its ability to consent to social compromises; the end of the search a general consensus in benefit of an “interventionist” police force equipped with shields where blood does not adhere; the end of universal health systems giving way to private clinics (for the poor); the end of pensions and hopefully end of pensioners, who die in misery; the end of speeches pretending to be ideological, replaced by lies that do not even intend to convince – because the State no longer needs them. There is neither the need to convince, nor is there the need for us to act for the future or even for progress. It will certainly be said that we are always asked to respect order, the law, private property, but – precisely – this is not asked of us. There is no waiting, no negotiation with what would be a recognised otherness, that of a subject-people or an object-population, there is only the immediate imposition of force on a rejection: after the people, after the population, now comes the time of the absence of population, of the depopulated.

Capital, sovereignty, and the avatars of the Great Desertion. – Without taking into consideration the hypothesis according to which the barbaric radicalisation of the State-Capital ensemble stems from a decision regarding the anticipation of a global disintegration of living conditions, we risk only seeing in the ongoing reconstruction of the modes of governmentality but a simple twist in the history of the accumulation of capital and the maintenance of sovereignty. Bt this would be a story at half mast, incomplete. On the one hand, capitalism has really become schizophrenic, but not à la Deleuze and Guattari: how to wager – with Musk and Bezos – on the exploitation of asteroids and interplanetary colonisation while all the while checking that the architect has indeed planned a sauna in New Zealand’s climate shelter? Can one accumulate capital properly while one accumulates tinned food? By deserting the surface of earthly soil, capitalism renders its tendency to deterritorialise a little too real.

On the other hand, the State has problems with the maintenance of its sovereignty. If this consists in deciding on the state of exception, it is difficult to grasp what this state calls upon when the concern for the population is equal to zero, and when the territory becomes inseparable from a representation of it in terms of a flooded, burnt, or infested area, with hordes that will soon be looking for a little petrol. Once autonomous of the territory and the population, sovereignty changes meaning: the “absolute and perpetual power” (Bodin) of the sovereign no longer relates, formally at least, to a social body, to a community, to a demos or a Republic, but it detaches itself from it and ends up opposing it without nuance. The State exits its location. It is not only that sovereignty reveals itself to be a power without disguise, a monopoly of violence released from any discourse of justification, it is that the object-population is no longer to be subjected, or to be normalised, it is – at best – to be pushed back beyond the borders which the self-welfare State needs to maintain as much as possible its mode of existence. It is safe to wager that one day each citizen will receive by e-mail a notice announcing their new refugee status.

The State of self-welfare (against what?) – So if one asks what could be, for our day, an analogon of this “society against the State” that the anthropologist Pierre Clastres theorised, a society capable of avoiding on the one hand the formation of a sovereign entity separated from the social body and on the other hand the accumulation of capital, in other words, a society whose indivisibility – as Viveiros de Castro says – is first and foremost “negative” (2), in that it seeks to avoid any hierarchy (the hieros of the State and of capital), then it is in the context of the contemporary socio-political schism, of desertion of capitalism – underground or in space – and the formation of the State-against-society that such an analogon will have to be thought of. If this society against the State, which can be described as “primitive” in that it designates what must be thought first, primitively, before any other social consideration, if this “primitive society” therefore “will always exist: as an immanent exterior of the State, a force of anti-production always threatening the productive forces, a multiplicity that cannot be internalised by the great world machines”(3), what can it be empirically when – a singular reversal – the State expels society and constitutes as an exterior, when the productive forces threaten with anti-production what could have opposed it, and the world machines no longer even seek to internalise multiplicity? Should not this change be read in the institutional acts which seem nevertheless to continue – out of habit, like a sort of reflex, in the manner of a zombie – to include, to maintain in certain dimensions, the reproduction of the workforce , asking us for “little gestures” for the environment (assuming someone still believes in it)? The self-welfare State and its depopulated or absent population is the configuration from which perspectives as opposite as the “politics of multiplicities” (Eduardo Viveiros de Castro) and the “mass” revolutionary hypothesis (Frédéric Lordon) must be evaluated.

Thinning out. – The State is about to depart, unless it has already left – from its old functions at least, from its relation of interest for the citizens (even if the administrative machine still functions, more or less, in an acephalous mode). It is true that its heavy status keeps it on the ground, but its spirit is elsewhere, and jealous of the CEOs. The Great Desertion is underway as the desert grows. But the desert is not a dead place, it is rather a place where life returns, the space where the oldest replays its contacts with the most recent (4). When the view clears, the depopulated learn to count themselves. And then face reality: there is only us on Earth. We, humans, those other than humans, ghosts and stones, animals, foreboding machines: so much power, so much cosmological breadth, so much love and anger. All in all, we should make it.