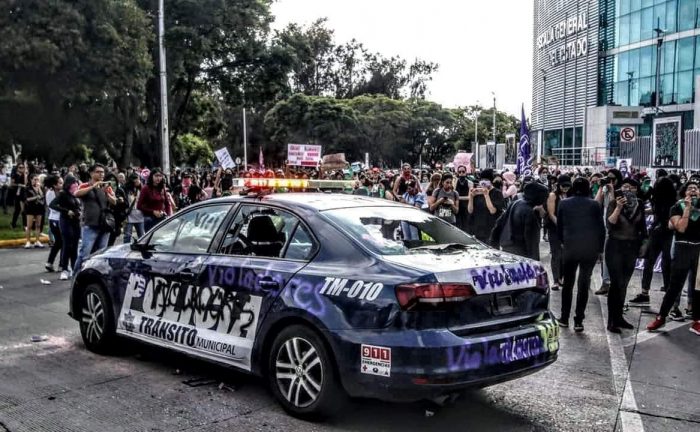 Mexico: No one said it was peaceful

First published on Antagonismo, on Aug 17th 2019. An account by an anarchist feminist in Mexico City. Translator’s note: throughout feminine adjectives were used which cannot be replicated in English. The translation follows.

The Mexican State, the media, the people who call us liars every time we denounce sexual assault, that we exaggerate, now publicly indicate that a mass rape by police towards a young woman was a lie because she was afraid to continue with the charges because no one offered her a guarantee of safety for herself and her family, the incredulous moan and reaffirm their putrid postures; now rejoicing that they were right because the woman lied, and gallantly reaffirm that they are innocent men.

The people are satisfied with the version in the videos the media published, where they disprove the accosted woman; and it’s easier this way, they are filled with the tranquility of knowing that they can continue to trust in their executioners, it’s so much easier for them this way, just as they can keep on feeling guilt-free supporting a social system which empowers, to the umpteenth degree, violence against the bodies of women; they can walk peacefully imagining that the police will not sexually assault their daughters…

What they forget is that this is not first or the last case where women, around the world, denounce public figures for sexually assaulting them; they’ve always abused their power, and they will continue do so, just as a man who is not a state functionary will hide in the shadows to attack, these public figures hide behind their titles of police, military or politician.

Aug. 16th, 2019 Protests against gendered violence in the Mexican territory

As the sun began to set everything can be tallied up as beacons of good behavior, good citizenship, well-behaved, shouting slogans, making pleas, almost begging to be heard…that we do not enjoy surviving in a daily life filled with the fear of being kidnapped, tortured to death, murdered; or that our mothers would see our bodies lying decomposed, or that they would never find us again at all…1

Later, the walls were painted, performances with fire, movement, ever-louder shouts, the first glass is shattered, shouts of empathy overflow, improvised tools and more glass falls. We shout with fury, with joy, with sadness…Yes, it was us, and yes we’d do it again a thousand times over, yes we ran off the men of our contingents, from our space of action. They had nothing to do there, they were not invited. They were not welcome as friends or allies.

Night covered us and we didn’t even fear the police, nor the dark streets, we were a tide of the unknown, together, strong, rabidly disorganized, sick with rage and frustration. We painted everything along our way, we smashed every symbol of the authorities responsible for our daily vexations. We burned what we could.

They ask us, why we are we mad?

While others call us: bitches, deranged, hysterics, whores, shameless. They make fun of us, they scoff at us, they call upon others to kill us, to sexually assault us, to lock us up; they say we don’t know how to protest; they tell us to spare the walls, the windows, the monuments; they ask who is going to clean up the city, that we’re a bunch of annoying chicks, that we are leading the movement astray, that we’re infiltrators, provocateurs, fascists, agents of the Yankees, porras 2 of the Left.

I was born with this body which marks me across history and across lands as something which they call woman, and they have created me to be submissive, stepped-upon, assaulted, to be a mother, to be a caretaker, to wait on others, to put up with anything, to be quiet, to serve the servant of the boss and the boss as well and that’s why it was all of us there, that’s why we don’t leave behind a single one and we celebrate the actions of us all.

No one called for a peaceful march, none of us came out in the name of another, we don’t want to represent anyone nor be represented by anyone, we don’t beg for justice from the executioner, we don’t beg for scraps from the traitor Sheinbaum 3, nor from the presidential seat; what happened yesterday [Aug. 16th] was an explosion of rage; we know that [the authorities] will not lift a finger to guarantee our safety or to punish those who assault us. There will be more murders of women for simply being women in this world; they will keep on blaming us; they will keep on calling us liars; scammers of family-orientated ideologies will come to tell us that we are not true feminists or anarchists; that we do not know how to do politics; and the mothers of those killed and disappeared will continue with their pain; they will keep on looking for their daughters in mass graves; new search organizations will be born; the children of murdered mothers will still be here; they will grow up only to see that humanity does not give a damn about what happened to their mothers…

Yesterday’s events allowed for us to see and recognize each other with complicit glances, with bodies covered in glitter, naked & vibrant bodies that we are not alone… And we do not want to continue hiding and perpetuating a social system of death, neither as women, nor as human beings.

I recognized myself in the glances of another, I took her hand, then we gave each other an honest embrace, a womanly embrace, a comradely embrace, after breaking a few windows and chasing away nosy men and policemen we walked each other home with a final message for the evening for what is worth fighting for: getting home safely and resting.