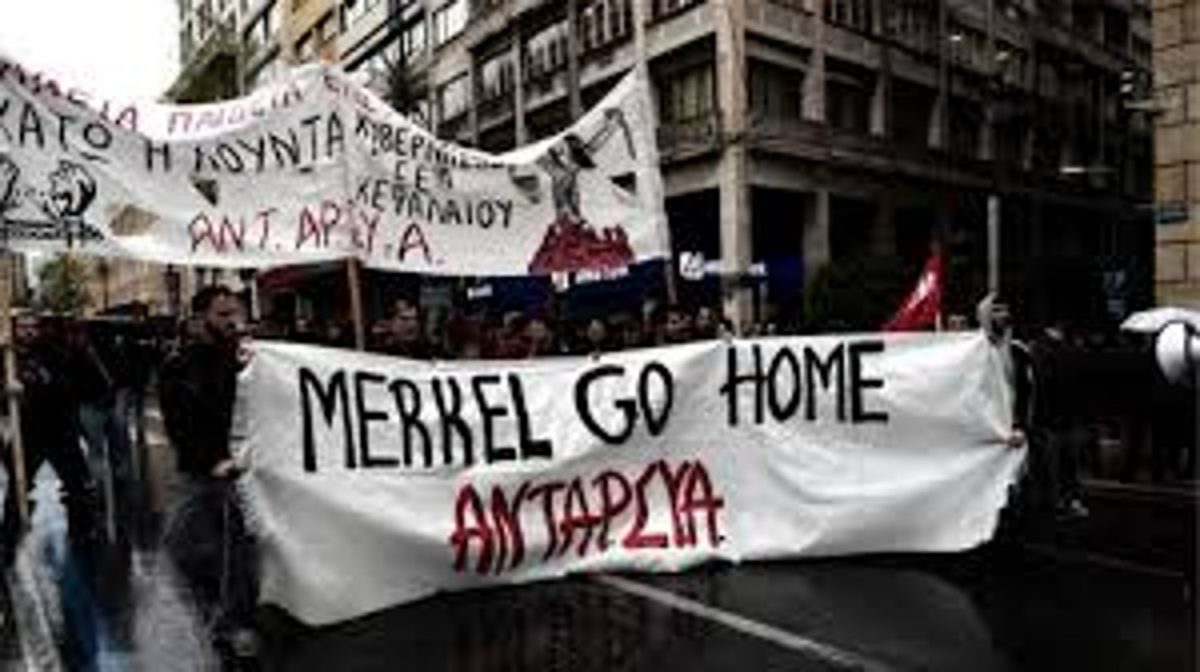 John Milios has posted an exceptionally clear analysis of the nature of the regime of austerity which has been imposed with impunity on the people of Europe. There has, of course, been determined local resistance on the street and by way of traditional forms of struggle – strikes and mass initiatives against specific anti-union programmes, wage cuts, and attacks on pensions and benefits, in the state and private sector. The current wave of strikes in the German postal and rail system are a good example of the ongoing struggle at the industrial/service front line. Across Europe workers are prepared to struggle, given sound organizational backing and determined leadership. This after years of attacks on unionised labour, the imposition of precarious contracts, legal restraints and the overall consensus in the media about what constitutes the fact of economy; a consensus in which the idea of the necessity of an unchecked market is an unquestioned given.

The above analysis holds also for the financial sector which “generate a structure for overseeing the effectiveness of individual capitals, that is to say a type of supervision of capital movement”

The production of surplus value constitutes a battlefield situation where resistance is being encountered, meaning that the final outcome can never be taken for granted. Techniques of risk management, organized within the very mode of functioning of the ‘deregulated’ money market, are a critical point in the management of resistance from labour, and thus for promoting and stabilizing austerity. (Milios)

Austerity is the imposition of the class position of one party in the economic process –the capitalist–at the expense of another party – the worker. The Trioka is a European wide instrument of class power. Neo-liberal ideological tropes–the free market, entrepreneurship, individual autonomy, free movement of capital and labour, a shrunken state sector, fiscal rectitude, deregulation etc – are the expression of class interest disguised as the “always and already given natural processes and structures” of the economy. At the heart of the economic process is a war of interests expressed at a political level as programmes of action. Austerity is one such programme inspired by a long and sustained analysis of economy along free market /libertarian lines.

What is the relation between non-philosophy and the sort of analysis put forward by Milios? Whatever the answer to that is, ( and reading a few chapters of Laruelle’s Non-Marxism will convince you that finding an answer is going to be a painstaking business) , it is possible for the economic analysis and the project of Non Philosophy/Non-Marxism to exist side by side here without the impulse to create philosophically inspired convergences of thought. We can let different perspectives sit side by side, as is already the case. It is enough to engage different fields of enquiry and respect the boundaries which mark out each discipline of thought as having its own set of conceptual and semantic presuppositions, and its own procedures and methodologies. Or even to embrace an incommensurability of local knowledges –- economics, sociology, anthropology, psychology non-philosophy, non-marxism etc – as a matter of principle. If non-philosophy is a performative work on the material of philosophy and not an anti-philosophy or a new philosophising of the real, then these local knowledges are only of significance to its project when they are taken up as predicates of philosophy to be used in a project of philosophical capture of the human.

Still, is Milios’s analysis simply a local knowledge — a practice of economic “science” rather than, at base, a philosophy or even an ideology? Of course I do not ask this question of Milios per se, but of Non-Philosophy and more particularly of Non-Marxism. For me, Milios seems to have uncovered the vital point about the financial crisis and the imposition of austerity regimes on the people of Europe — the financial crisis arises as a result of processes occurring at the heart of the capitalist production cycle and not at its periphery. Speculation on financial portfolios, risk assessment, fluctuation in stock market prices, fiscal regulation and deregulation etc are intimately connected with the “normal” processes of capitalist production. Financial crisis is not caused by speculation on high risk portfolios by unscrupulous individuals or banking institutions. As Milios  shows, every capitalist enterprise must seek capitalization from banks or private investors on the basis of a risk assessment, since one must borrow before production, distribution and sale and not after. The crux of risk assessment will revolve around the question of how well any particular enterprise can implement its future cost-cutting regime in relation to its nearest competitors. Cost-cutting, of course, implies a relation of power in which the capitalist seeks to reduce the “cost” of labour in a situation where the worker has nothing to sell to make a living other than his labour-time. This is a situation imposed on him/her by the nature of the regime of social relations. He must survive by the sale on the open market of his labour-time. To increase profits and sustain that increase in relation to one’s nearest competitor each capitalist must, of necessity, limit or decrease the wage of the worker. A risk portfolio is an assessment of how well any particular enterprise will succeed in implementing its regime of cost-cutting measures so as to reduce the cost of labour and increase profits. Imposed across the board by all capitalist enterprises, such a collective regime will, as a by-product, limit or reduce the living standards of the vast majority of the population. The power to produce, intensify or mitigate this “effect” rests with the capitalist class as a whole. The programme of austerity is a complex mechanism for achieving the structural and institutional conditions in which this cost-cutting imperative can be implemented on an economy wide basis across key enterprises, thus establishing the general wage rate at the lowest possible common denominator and establishing a high rate of profit for all enterprises. The across the board European “effect” has been an assault on the living standards of the people.

That being said and agreed the question looms— how to assess such an analysis in the light of the Non-Philosophical/Non-Marxist project. We seem to be caught in a situation which Marx all those years ago set out to resolve. He devoted over thirty years of his life to an investigation of the processes of the economy exactly because the question of the relation between suffering (of the vast majority), social power, and economy could not be answered at the level of philosophical speculation. And that because there was, generic to philosophy, a structural impediment which prevented an answer to the questions that most preoccupied him, an impediment of which he was well aware but never named. Laruelle has isolated and named this structural impediment as decision. If Marx was thinking at the level of philosophy — within the confines of the structure of decision – his awareness of this fact is made  clear by his abandonment of philosophical speculation and his dedication to a long project of establishing a foundation for radical thought on the basis of an analysis of economy. As a by-product of his dedication to economy he laid the basis for non-philosophy.

Key here is his determinism, which seemed to vacillate between a “determined” determinism and a determinism which is mitigated by an idealism imported by way of Hegel’s notion of the dialectic. In other words Marx tried by way of philosophy to dilute a crude determinism uncovered in his investigation of economy by smearing over it a dilutant called reciprocity or the dialectic. Laruelle has reversed this vacillation on the part of Marx by retrieving his determination-in-the-last-instance and restoring to it a determined determinism conditioned on the materiality of economy. That is to say he has extracted the transcendence imported via Hegel and substituted for it the notion of unilateral determination. Thus, perhaps, the relation of Non-philosophy/Non-marxism to Milios’s analysis is to subject it to a form of universalisation, establishing its implications forphilosophical thought, but by way of generalization rather that an absolutism based on decision.