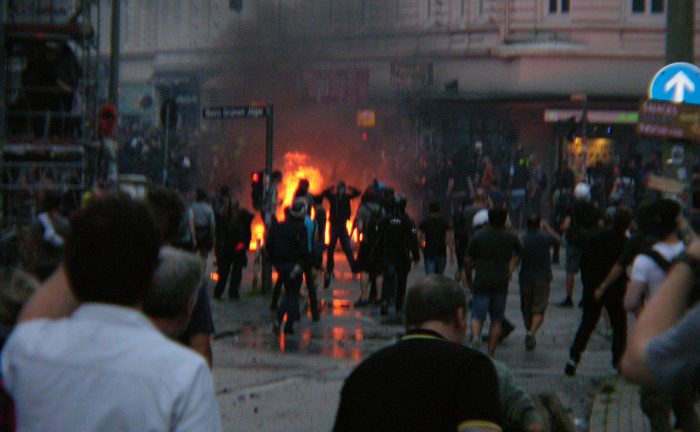 Final Remarks ( The Crisis and the Rift: A Symposium on Joshua Clover’s Riot.Strike.Riot)

Interlude on the Model

It is here that we might arrive at what I believe to be the most significant generic distinction regarding what kind of book it is. It is a book that makes models. A model always involves radical exclusions, always involves the economist’s most vexing incantation: ceteris paribus, “all other things being equal.” All other things are not equal. The things that are excluded from the model matter greatly. Models schematize; they reduce. The model is always exposed to the criticism that begins, “but isn’t it a bit more complicated than that?”

There is, naturally enough, a complementary genre of social thought, which eschews the clarity of models for a more thoroughgoing mimetic representation of the multiplicity, heterogeneity, the difference of the world in full, the world which provides our definition and limit of complexity. This may explain the confused summoning of “pure strike” and “pure riot.” If one believed the book were meant to be one of protracted elaborations of complexity, one might indeed be confounded by the clear identifications: periods of circulation and riot, periods of production and strike. But the question is not whether there are exceptions — there are. Arguing from exceptions (which occupies a surprising swatch of real estate in Toscano) is not terribly persuasive. That’s not how models work. They abstract from the particulars of history to render tendencies and balances of force exactly because there are exceptions, and these exceptions exist as a constitutive part of tendencies and balances, not external counterevidence.

Neither is the question that of whether models efface the world’s complexity — they do. Again, one may prefer otherwise, but such exclusions are what models are for. I would suggest that the vital question is: given what models sacrifice, do they offer us analytical gains in return? These analytical gains are not simply the educing of patterns within the seeming disorder of history. Via this clarifying process, models propose causal relations; they abstract enough to distinguish causes from effects, even within the entanglements of the historical dialectic. The great aporia of Foucault lies in the absence from his history of how society traverses one regime of power and arrives at another. And this underscores the differentia specifica of capital as not simply another regime or relation: It must move. It must be self-moving, must via impersonal domination not merely reproduce itself but expand, and thus must feature the capacity to do so. The question of causality in capital’s movement cannot be elided. One may of course retreat into ideas of overdetermination; it is an understandable solution to the problem of simplifying models vs. complexifying arrays. Marx himself was an adherent of ceteris paribus, precisely so he could inquire into capitalism’s laws of motion — inquiries which, in detecting not just a direction but a cause for that direction, can in turn suggest trajectories rather than hurl themselves into a mysterious world of evental surprises. Such inquiries are not “prophesy “or “portent” or any of the other portentous language Toscano deploys. They are expressions of the sine qua non of historical materialism: that the movement of history includes an objective character.

Riot. Strike. Riot proposes a model with a causal mechanism, with a certain objectivity: in the last instance that of the law of value expressed at a systemic level. Clearly the entire argument cannot be repeated here. The pursuit of accumulation moves capital first toward a peak of production centered by industrial capital, and then away from this peak with accumulation waning; this rise and fall (“the arc of accumulation” as I call it) exists both for given internal cycles and, as capital exhausts its capacity to displace its contradictions spatially and temporally, exists at a macro level for capital as a whole — the level of analysis which Marx enjoins us to hold in mind. This arc of accumulation entails concomitant restructurings of profit sources and class composition, and these restructurings will act as affordances that help shape modes of struggle and reproduction for both capital and proletariat. While class conflict has always been immanent to capital’s social relation, it has not always been centered in production (and here we note that the model I propose tries to complicate the standard model provided by traditional Marxism’s identification of the proletariat with the working class, which seems to me the reduction more worth our investigation). In accordance with this arc, capital first internalizes its antagonists from circulation as production expands; after cresting the peak of accumulation in the same dialectical course, capital’s antagonists are increasingly externalized from production — notably in the form of surplus population. The argument that challenges this model would have to demonstrate convincingly that this has not happened, is not happening. It cannot rely on, “but isn’t it a bit more complicated than that?”